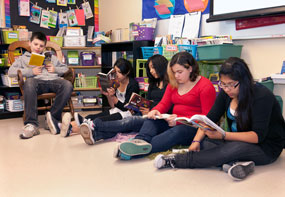 What a great age.  (Nope, not even kidding!)  Early adolescents–around age 10 to 14–are an intriguing group.  Their complex thinking processes, creativity, awareness of the larger world, and daily grappling with fairness–what’s right, what’s wrong, who decides. . .not to mention that they possess often wacky and playful senses of humor.  It’s a wonderful time to introduce young readers to books that we loved at their age as well as some of the great new “classics-in-the-making.”  Our first list was way too long, so we narrowed it down to these 10.  We tried to pick books that we loved (of course), but wanted to make sure these were all books with intriguing characters, strong writing, and “staying power.”   Because this is an age group that thrives on discussion, we were careful to choose books that are “conversation worthy.”  Hopefully you’ll see here some old friends to revisit with your early adolescents–and also some new titles to discover and discuss together.

The Golden Compass Series ( His Dark Materials) by Phillip Pullman

This series belongs alongside Harry Potter and The Hunger Games books as modern classics.  They appeal to all readers, though written for this age group.  Exploring themes of religion, friendship, politics, family, the notion of magic and of other worlds, it touches on every major theme that resonates with young teens– or really, with all of us.  The first book begins in another world, similar to, yet wholly unlike, our own.  The orphan (or is she?) Lyra Belaqua, and her animal familiar (daemon, they call them) Pantalaimon are our guides into this world.  The second book continues in our own world with another abandoned youngster, Will.  Their worlds and many others will collide before the adventure is finished.  These phenomenal books hold up to (in fact, they practically demand) several readings.

The Hitchhiker’s Guide to the Galaxy  by Douglas Adams

More spoof and parody than actual science fiction, this hysterical book is also worthy of several reads, each time bringing you new insights and discoveries.  The characters are terrific.  You’ll meet the unfortunate Arthur Dent, who basically has no idea what is going on as he travels the galaxy with his side-kick Ford Prefect, his remarkable friend from Betelgeuse.  Then there’s Zaphod Beeblebrox, with his two heads, three arms, and cavalier attitude; Trillian the lovely Earth girl with the Heart of Gold; Slartibartfast the planet builder and fjord-maker extraordinaire; and  of course, Marvin the eternally depressed robot. Life-“loathe it or ignore it, you can’t like it” is his  philosophy. Adams’ writing is often compared to Vonnegut, Monty Python, and Terry Pratchett.  Imagine the  conversations kids can engage in, sparked by off-beat characters roaming the galaxy asking questions  such as, “Why are people born? Why do they die? What is my purpose in life? Does it really, cosmically speaking, matter if I don’t get up?”

We both recommend and gift this series to everyone we know age 11 and up.  They are the kind of books that you just can’t put down.  Beautifully written and intensely engrossing, they enchant boys and girls, men and women alike.  A mere synopsis does not do it justice: love triangle, post apocalyptic world, kids fighting gladiator style to the death on TV as entertainment/repression… it’s all been done, but never like this.  And never with characters like this.  Katniss Everdeen is a heroine who is the antithesis of Bella in the Twilight series, which is reason enough to love and root for her.  She has been the only thing keeping her family alive since the death of her father, so naturally when her younger sister is selected to play the Hunger Games, she volunteers to take her place.  She doesn’t realize she just might win – and become the symbol or hope and revolution for the whole country.

Summer of My German Soldier by Bette Greene

Stories about World War II have a decided pull for readers of all ages.  Perhaps we all find a certain fascination in how and why people can be so cruel to others.  Or perhaps we find beauty in the strength and love and grace that people are still capable of in the worst of circumstances.  Whatever the reason, this book presents a different side of the story- what happens when you meet the monster, and they aren’t a monster at all, but perhaps are kinder to you than your own family?  German prisoners of war are shipped to a prison camp in a small southern town.  They are Nazis, and should be hated, feared and despised, yet when 12-year-old ( Jewish) Patty meets Anton, she finds a true friend.  This books will definitely make you cry, but it will also make you think and feel.  A couple of interesting websites to pair with this book: bettegreene.com, with insight and details from the author, and this blog “Days of My Life,”  about the daily life of a teen-aged girl in Iraq  who calls herself “Sunshine” and is no stranger to living through terror and violence while keeping friendship and peace in the forefront of her mind.

The Chocolate War by Robert Cormier

What makes a person decide to stand up for what they believe?  In this case, Jerry  refuses to sell chocolates for his school fundraiser–and the ramifications spin out of control.  The Chocolate War is considered the first psychological thriller written specifically for an adolescent audience.  This book not only shows a reader the world of teenage boys, it puts the reader in the shoes of the three main characters. Cormier brings them to life by realistically describing the characters’ feelings. A novel of good versus evil with real people in real situations. On many levels, a disturbing book, but one that invites discussion.

Little Women by Louisa May Alcott

“Write what you know” is what they (who are they, anyway?!) always tell young writers, and Louisa May Alcott may have yearned to write exotic thrillers, but it was writing what she knew – the story of four girls growing up together in 19th Century New England – that earned her centuries of devoted readers.  Though it is a simple story, it touches on all the things we all think about as we grow up: Who am I?  What do I want from life?  Who do I love?  How can I be a good person?  Those questions, and the transparent honesty in the telling of the coming-of-age tale, keeps this book evergreen.  It may not be the hippest book on the planet, but it’s the one that many “little women” turn to over and over again for comfort, insight and reassurance.

Bridge to Terabithia by Katherine Paterson

Jess and Leslie, two fifth graders become unlikely best friends.  Jess is determined to be the fastest runner in their class, and is, until Leslie, a self-proclaimed tomboy moves into town and is even faster.  In the nearby woods, they create a special kingdom they name Terabithia.  Readers are caught in the magic of their stories, imaginary world, friendship. It’s one of those books that often represents a milestone for young teens, as they can empathize as a narrator their own age copes with real-world life drama and loss.

Number the Stars by Lois Lowry

A moving account set during the “relocation” of the Jews in Denmark during World War II.  (Yes, another WWII book!)  Two best friends growing up during the Nazi occupation experience the horrors that take place around them–and to them–with disbelief, fear. . .and courage.   Though only a young pre-teen herself, Annemarie puts her life in grave danger to help her friend and their family escape the concentration camps.  Though very appropriate for young readers, there is no neat resolution at the end, much like real life.  A book that generates rich discussion and heartfelt connections.  It’s the kind of book that readers are drawn to read and reread at different stages of their lives.

A Wrinkle in Time by Madeleine L’Engle

It was a dark and stormy night…  the night that Meg Murray, her little brother Charles Wallace and their new friend Calvin O’Keeffe use a wrinkle in time (or a tesseract) follow three witches (women?  spirits? stars?) to the dark planet in search of Dr.  Murray, who disappeared years ago while working on a secret government project concerning space and time travel.  This book is part science fiction, part coming-of-age, all wonderful.  Meg is a delightful, awkward, prickly and relate-able girl, and the best part is that Wrinkle is not only the first in the series, there is another series after it that follows Meg’s daughter Polly, so we really get to know “what happens when she grows up.”

It’s easy to overlook what a great story this is by dismissing it as a creaky old classic, but that would be a terrible mistake!  For any kid (or adult who has forgotten how fun a fantastic swashbuckler can be) who likes the Pirates of the Caribbean movies, pirate stories in general (we sure love ’em!) or just a good old tale of good and evil (you can definitely see some Harry Potter and some Peter Pan in both hero and villain here) you can’t do better than Jim and Long John Silver.  Pirates, good guys, hidden treasure, mutiny… this has it all and keeps everyone turning just one more page.  The classic N.C. Wyeth illustrations are beautiful.  This books makes for a fantastic family read aloud too, as it enchants younger readers and delights older ones.

This entry was posted on Saturday, June 11th, 2011 at 7:23 pm and is filed under Uncategorized. You can follow any responses to this entry through the RSS 2.0 feed. You can leave a response, or trackback from your own site.